Below is some basic data on Windows Azure as well as brief exploration into relevant background topics (such as managed code and dynamically generated Web page content). The below contains no details on the various Azure Services (such as Live Services and .NET Services) and few details about the Azure OS run-time. It's all pretty high-level and gauzy.

Future posts may fill in more details such as:
Notes from Manuvir Das, "A Lap Around Azure"

Windows Azure == OS for the cloud.
It's the lowest layer. Services are layered on top of this foundation, including:
These services are implemented using REST, HTTP, and XML.
What's a cloud? A set of connected servers.
What can you do on the cloud (i.e., on those servers)? Install and run services; store and retrieve data.
A client can access Azure services via calling into a "managed class library" (presumably some code that contains RPC-like stubs which — at run-time — invoke the appropriate code).

In the desktop computing world, an OS provides:
In a cloud computing OS, you want all of the above plus 24/7 operation, pay-as-you-consume, transparent administration (i.e., which hides the complexity of remote mgmt as much as possible).

What features does Azure provide?
More on Automated Service Management (Is this the so-called Fabric Controller? Yes, I think so.)
The developer writes his code as before. But he also now creates a model, which specifies:
Note that you don't *have to use* their automated, abstracted thing. They provide a so-called "escape hatch" or Raw mode, which lets the developer build a VM from the ground up and run his service within that VM (where the developer would be responsible for managing that service as well). So this offering much more closely resembles Amazon's EC2 service except even with this the developer doesn't actually supply his own VM (as he would with EC2) but rather configures one of their VMs.


More on Azure Storage: massive scale, availability, durability. Geo-distribution. Geo-replication. This is NOT to be confused with SQL Services because Azure Storage does not expose the full database-management interface (which would include querying, insertion, schema creation, and so on). Only can upload data (and presumably delete it?). And available ways to structure data are very simple.

Cloud Storage is accessible from anywhere on the Internet. Has REST APIs on it.

Bunch of tools and support, including for logging, alerts, tracing, ...

My own look at things — questions and comments
Since someone will ask, what are the benefits of moving an app to the cloud?

At some point, will look in more detail at each Azure Service being offered — to understand what can do with that service, who uses it, and so on. But for starters here they are:

The Windows Azure Fabric is a "scalable hosting environment" that is "built on distributed MS data centers." The Fabric Controller manages resources, performs load balancing, observes developer-provided constraints/requirements for an app as well as the real-time conditions for that app/service and responds accordingly (by, for example, automatically provisioning additional resources, restarting the service, taking away some unneeded resources, and so on). The FC scales app resources automatically as demand rises and falls. Used to deploy service and manage upgrades.

The Azure OS performs advanced tracing and logging on apps that run on it — so that developers can monitor the status of their apps as far as compute, storage, and bandwidth. Presumably, the constraints that developers specify are in terms of the type of things that can be observed using this tracing. Note that since MS is allowing apps written in non-MS languages, the types of "signals" that can be used to monitor the health of an app are likely OS-level (rather than language-level) things. For example, easy to identify the # of open sockets and heap size. More difficult for an OS to have visibility into language-level resource usage such as the number of locks created/acquired and so on. Hence, the types of things that one can specify in the application model must be rather generic and observable from the OS-level. I wonder whether — for apps written in MS languages and which will run in an MS environment (such as .NET framework) — one can specify a different (richer) set of constraints in the application model.

But what about state? How to share state across various instances? (Why need to share state? Because a user could interact with a different instance each time and the fact that there are multiple instances needs to be transparent to that user — i.e., the user can begin a transaction on one server and continue that transaction on another) Solution: Use a single centralized database (a "durable store") to store all state; no server stores any state locally. All servers access state from this store == all servers have same view of state.

Have this available in Azure as the Azure OS storage: blobs, simple tables, queues. Access this storage via REST and ADO.NET Data Services.

A brief detour — some background on Microsoft languages and run-time environments
Evidently Microsoft has developed an infrastructure which enables code to be written in any one of several different languages then run on a variety of platforms. Parts of their infrastructure are reminiscent of Java with its bytecode and platform-specific JVMs. In particular, MSFT created various languages (e.g., C#, J#, VB.NET). Each of these languages has its own compiler which takes a program in the language and produces code in an intermediate language. This code is platform-agnostic (much the same as Java bytecode); the intermediate language is CIL — Common Intermediate Language. Then for each different hardware/OS platform, there is a Common Language Runtime (much the same as there are different JVMs for each hw/OS platform). CIL code is executed on the CLR. The CLR compiles and caches the CIL code just-in-time to the appropriate hardware instructions given the underlying CPU architecture (e.g., x86).

So the Microsoft languages for which a compiler exists (which converts a program in that language into a program in the intermediate language, CIL) are referred to as managed; so a program written in C#, J#, or VB.NET is managed code. Such code (after being compiled into CIL) executes on the CLR, which is a managed environment. Unmanaged code by contrast is that which is not compiled into CIL and does not run within the CLR. So when we say that something is a CLI Language, we mean that there is a compiler that takes a program in that language and produces the corresponding CIL code. (Fyi, CIL was "previously known as MSIL — Microsoft Intermediate Language.") Actually, "managed code" is a general term which covers any code that runs within a VM (rather than executing directly on the underlying hardware). A C++ program written with Microsoft Visual C++ could be compiled into managed code (to run in the .NET CLR) or unmanaged code (using the old MFC framework). But in general all code written in a particular language will be compiled into managed or unmanaged code (rather than being able to be compiled at will into one form or the other). 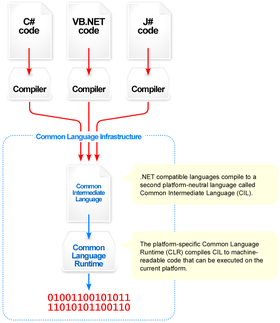 The CLR evidently exports an API that offers a lot of functionality that is usually provided by an OS. In particular, the CLR provides functions for: memory management, thread management, exception handling, garbage collection, and "security." This functionality is provided in the Class Libraries. The class libraries implement common functions such as: read/write, render graphics, interact w/DB, manipulate XML documents. The .NET Framework Class library consists of two libraries: 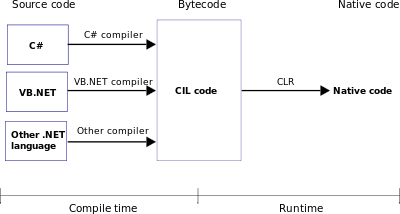 What kind of benefits do you get by using a CLI?
Another brief foray away from the main topic here: Web Page Content
A web page can have only static content (the web page's content doesn't change) or it can have dynamic content. In the latter case, where does the dynamism come from? Two possibilities.
Suffice it to say, we could explore these topics much more carefully and thoroughly. But the above suffices for our purposes, which are to understand what ASP or ASP.NET are (answer: server-side scripting languages, like PHP).

On the topic of Model-View-Control