Below we have some notes from: "Introducing the Windows Azure Platform" (by David Chappell)
http://go.microsoft.com/fwlink/?LinkId=158011 as well as from the video presentation (from PDC 2008) by Erick Smith and Chuck Lenzmeier, "Under the Hood: Inside the Windows Azure Hosting Environment " http://channel9.msdn.com/pdc2008/ES19/. The PPNT slides associated with that video lecture can be found here: http://mschnlnine.vo.llnwd.net/d1/pdc08/PPTX/ES19.pptx.

General comments
At a high level of abstraction, think of the Azure Platform as a gigantic computer — though in actuality it consists of many physical computers, switches, routers, load balancers, and so on. A single logical OS runs over all of these different pieces of hardware and manages them. So in the same way that a user adds a physical device (such as a NIC) to his PC — by installing the driver for that device — the Azure OS adds switches, computers, and so on via installing the driver for the device. The driver in this case may not necessarily be the software that ships with the hardware (as would be the case when a user installs some hardware on his PC) but instead some Azure-specific code which lets the Azure OS monitor and fully manage the given machine, whatever it may be.

As noted, a user can run an app on Azure OS or store data using Azure OS or both. If he runs an app on Azure OS, he can perform horizontal scaling — that is, run more than one instance of the same app on different machines. In effect the app is replicated across different resources so that the overall app bandwidth (e.g., ability to perform a distributed computation or serve clients) is increased.

An app itself can consist of more than one "role," where there are front-end roles (those which receive HTTP/S connections) and back-end roles (those which do not accept incoming network connections; they are more processing or computation focused). So there can be replication of a particular role (e.g., create a new instance of the front-end "Web" role for every 1500 new client connections I receive) or of the entire app itself (e.g., create another instance of this entire web application, where that instance will include some number of instances of front-end and back-end roles). (CONFIRM THIS: it is certainly the case that one can replicate instances of particular roles; unclear whether replication can also be done at the level of an entire app, i.e., at app-granularity.)

A motivating app — for concreteness
I think our exploration of Azure would benefit greatly from considering some particular example app. So let's imagine the following app (that I just made up right this second): a credit-checking app used by landlords to determine whether or not to rent to some would-be tenant. The front-end of the app accepts a connection from a landlord who does two main things (via filling out a Web form): (1) provides all of the information about the would-be tenant (name, age, birthdate, SSN, previous addresses, previous landlords, references, ...); (2) provides order-fulfillment information (identifying where the finished report should be sent, how the landlord is going to pay for use of the service, and so on).

Let's assume we can use a single front-end role to accept this information. Depending upon the design of the app, the landlord may need to submit more than one form (e.g., one form for info about the would-be tenant and a second form for order fulfillment info). For simplicity, let's assume there's a single form and a single front-end role. Naturally, the number of instances of that front-end role should depend upon the level of demand for the service at any given instant of time. (Note that an app can increase the number of front-end instances, back-end instances, or both. Similarly, an app can "shed load" by killing instances of front- or back-end roles.)

Then there are at least two back-end roles: one for payment processing and a second for generating and supplying the report. The back-end roles can make outbound network connections, as necessary, to process the credit card payment or to retrieve info on the would-be tenant (even to invoke other Web services to perform some part of the due diligence involved in report generation), and so on.

Clearly there must be some information sharing across these roles; the info gathered by the front-end role needs to be made available to the back-end roles. Further, if there are multiple instances of each back-end role, those instances need to cooperate so that they don't duplicate one another's work. There are a number of different ways to structure this workflow; an obvious approach is for the front-end role to populate a record or document with the info it has gathered then to add that record/document to a queue — where the back-end roles take from this queue. So there's the familiar producer/consumer relationship there. Clearly, we want some kind of notification to be sent to idle Workers whenever a new job is available.

I'm not sure whether it's even possible for the Web role to create a network connection directly to the Worker role. We know that the outside world cannot connect to the Worker role; not sure whether that prohibition also extends to internal network connections. Depending upon the support for real-time notification of Workers that work is available, it might be appealing to be able to directly poke a worker. Some tradeoffs in polling versus interrupt-based notification but no obvious new twists on those tradeoffs presented here.

Every blob, table, and queue is named using URIs and accessed via standard HTTP operations. So these objects can be accessed locally (by Worker and Web Roles running in the same data center, for example) or they can be accessed across the WWW. Can use REST services to identify and access each Azure Storage data object. There are libraries which encapsulate the REST protocol operations (e.g., ADO.NET Data Services or Language Integrated Query (LINQ)) or one can make "raw HTTP calls" to achieve the same effect. If query a table stored in Azure Storage and that query has lots of results, can obtain a continuation object which lets you process some results then get the next set of results, and so on. So a continuation object is like a list iterator. 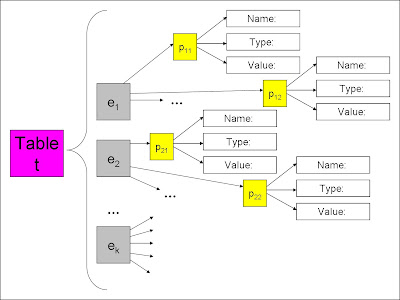 Azure Storage — Access control: it sounds like they use a token-based system in order to control who can access what data. In particular, when a user creates a storage account, she's given a secret key. Every request made to the storage account (to modify account settings, to access some blob stored as part of this account, to edit a table, and so on) carries a signature which is signed by this secret key (like a token). Having such a token means that you can access all the data stored in that account (as well as the account settings themselves?); i.e., the granularity at which access control decisions are made is account-level. Presumably, a user Alice who owns an account can provide a signed token to other users whom Alice wants to allow to read/modify stored data (CONFIRM.) Regrettably, it appears that Alice has to let these other users have all types of access (create, modify, delete) to everything (all data as well as account settings?). That said, part of the Windows .NET Cloud Services is access control so perhaps this could be layered on top of storage in order to achieve a more fine-grained access control system? (CHECK.)

Update: there is evidently now a way to provide container-level or blob-level access (rather than only being able to give account-wide access). See: http://blog.smarx.com/posts/new-storage-feature-signed-access-signatures


Windows Azure storage operates with “shared key authentication.”  In other words, there’s a password for your entire storage account, and anyone who has that password essentially owns the account.  It’s an all-or-nothing permission model.  That means you can never give out your shared key.  The only exception to the all-or-nothing rule is that blob containers can be marked public, in which case anyone may read what’s inside the container (but not write to it).


Signed access signatures give us a new mechanism for giving permission while retaining security.  With signed access signatures, my application can produce a URL with built-in permissions, including a time window in which the signature is valid.  It also allows for the creation of container-level access policies which can be referenced in signatures and then modified or revoked later.  This new functionality enables a number of interesting scenarios...


Azure Storage — Concurrency: The basic model appears to be that a user or app would download a blob or entity then modify that blob/entity locally. After that, the user/app would attempt to commit those local changes — by writing the updated version back to storage. So, what happens if more than one app attempts to modify the same storage object (e.g., blob or table) at the same time? The first writer wins. Subsequent writes (of the same version) will fail. This is a form of optimistic concurrency and is achieved via maintaining version numbers. Note that an app can force his changes to stick by unconditionally updating an entity or blob.

The Fabric Controller (FC)
One per datacenter. Is replicated across several machines (maybe 5—7). Owns all of the resources in the fabric (including computers, switches, load balancers). Communicates with each machine's Fabric Agent. Every physical machine has a Fabric Agent running on it which keeps track of how many VMs are running on this machine, how each Azure app in each VM is doing, and so on. The FA reports this info back to the FC which uses it (along with the app's configuration file or model) to manage the app so that the app remains healthy (as defined in the app's configuration file).

The FC monitors all running apps, manages its own infrastructure (e.g., keeps VMs patched, keeps OSs patched, ...), and performs resource allocation using its global view of the entire fabric along with the configuration file for the app that needs to be deployed. All of this is done automatically. The FC presently (i.e., in the CTP) allocates VMs to processor cores in a one-to-one manner (that is, no core will have more than one VM running on it).

The FC maintains a graph which describes its hardware inventory. A node in the graph is a computer, load balancer, switch, router, or network management device. An edge is a networking cable (e.g., connecting a computer to a switch), power cable, or serial cable. When an app needs to be deployed, the FC may allocate an entire physical machine or, more commonly, may subpartition that machine into VMs and allocate one or more VMs to the given role. The size of the allocation depends upon the configuration settings for that role.

The service model
Is "declarative," which means rule-based. So the model or specification consists of a set of rules. Those rules are used by the Fabric Controller in initially allocating/provisioning resources for your service and to manage the service over its lifetime (i.e., maintain its health). The model contains info that you might otherwise communicate to the IT department that was going to deploy and run/manage your service in-house. This technique/setup is referred to as model-driven service management.