Slide 1:
As we begin to handle the object instantiation, we see keyword new which
causes an object to be allocated (the data structure for which is shown below). 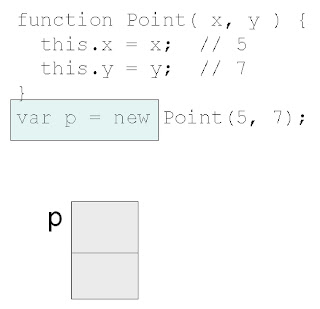 Slide 2:
Here, since no Point object has been created yet,
we create a new class (C0) and we make p point to C0.
There will also be a pointer created from the Point function to C0. 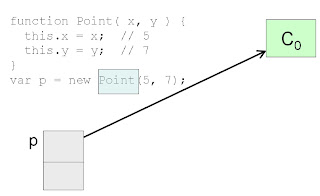 Slide 3:
Now we execute the first line of the Point function,
which causes a few things to happen:
(1) create a "backing store" (in yellow) which will hold
p's values for the Point object's properties;
(2) create a new class C1 which notes that property x is stored at offset 0;
(3) change p to point to C1 instead of C0;
(4) Have C0 point to C1; what this reference says is: "If ever have a class
C0 and add the property x to it, transition to C1." 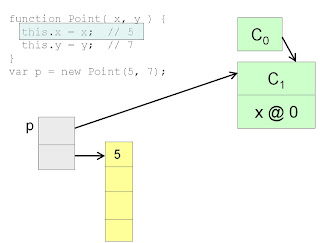 Slide 4:
Now we execute the second line of the Point function which causes
the creation of a new class C2 which is C1 plus the y property.
p is changed to point to C2 and its value of y is written to the
backing store at offset 1 (as noted in C2). Then we add a pointer
from C1 to C2 (as we did above from C0 to C1 and for the same reason). 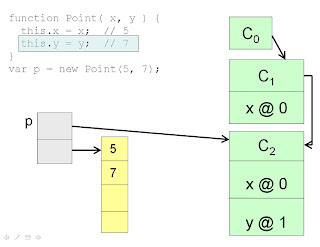 So at about minute 7:30 in the video, Erik Meijer asks whether hidden classes are canonicalized; e.g., whether the above would be equivalent to a class for which the two assignment statements were swapped (i.e., this.y's value set first). The answer is "no," two such classes would not be equivalent because it's part of the JS spec that the order in which properties are declared matters (referred to as "creation order"). Then another question: what if delete a property from an object? Lars replies that what happens in that case is not a reversion from C2 to C1 (for example) but instead — since deletion is very uncommon — the backing store is converted to a hash map; p's reference to the backing store is swizzled to instead refer to this hash map; and p's pointer to C2 is changed to point to "a sentinel class" Cx, which presumably encodes that accessing properties of the new object should be via a hash lookup. This lets the VM be simpler.
Another thing that improves performance: we discussed previously how the only numeric type in JS is "Number" (as contrasted to other languages which have int, float, double, ...), which is a double. It turns out that operations on floating point numbers are slower than operations on integers; in part because, when manipulating doubles, have to allocate a new heap object for every operation performed (to store the intermediate result). V8's improvement in this regard is two-fold: (1) a single bit is introduced which identifies whether the numeric value stored is a "small int" (i.e., can be represented with 31 bits) or not. If so, the property stores the actual integer value. Otherwise, the property stores a pointer to a heap object which contains a big integer, float, or double. (2) If operating on ints (using +, -, ...), will use integer operations, which don't allocate anything on the heap and hence run much more quickly than float operations.
Execution Contexts
One can run multiple JavaScript scripts on the same V8 instance by providing each such script with its own execution context. The motivation for this is that one script might modify the global object in a way that incorrectly affects another unrelated script's behavior. Practically, each window and iframe on a given HTML page (i.e., within a tab) is given its own JavaScript environment.
The behavior of each script is isolated from every other by using a separate execution context (or environment) for each. An execution context consists of built-in JS functions and objects, custom JS functions, and custom JS objects. (It's curious that each script must have its own version of built-in JS functions rather than all scripts being able to share this code; presumably, this is due to JS's dynamism wherein a script can redefine the behavior of a built-in function.)
Creating a context differs depending upon whether it's the first one or the 2nd through n'th one. For the first context, built-in objects must be created and the built-in JS code must be parsed and compiled. For the second through nth contexts, only built-in objects must be created (not sure why don't need to reparse and recompiled? because using version obtained in creating first context?). V8 contains an additional optimization which speeds up creating the first execution context. Namely, one can use a snapshotted version of the already-compiled built-in JS code. In particular, a snapshot contains a serialized heap which contains the already-compiled version of the built-in JS code. The implication is that code generation for the built-in JS code is deterministic; it results in the same compiled code each time.
V8 Origin
Recall that the Same-Origin Policy defines an origin as a combination of scheme (e.g., http or https), domain, and path. In V8, an origin is an execution context; where each execution context corresponds to a single iframe or window.
Other references
* Financial Times interview of Lars Bak
* V8 documentation