Basic questions:
* Where does V8 live in Chrome?
How does it interact with the rest of the browser?
* Where do the JS engines (interpreters) live in the architecture
of IE and Mozilla Firefox?
Notes on The Security Architecture of the Chromium Browser (pdf).
The browser is divided into two separate functional units, which have different responsibilities and different trust levels. There is the rendering engine (which represents the web protection domain) which contains the HTML parser, the JavaScript VM, and the DOM handler. This is sandboxed (has restricted access to the underlying OS) and treated as a black box, the input to which is HTML and the output of which is "rendered bitmaps" (to be displayed to the screen). Then there is the browser kernel (which represents the user protection domain) which manages persistent resources (e.g., cookies and the password database) and interacts with the OS to receive user input, draw to the screen, and access the network. The browser kernel is not sandboxed. Goal: if the rendering engine is compromised (or when), contain that compromise to the rendering engine; do not let this result in compromising the user's entire browser, much less his entire computer.
More on the Rendering Engine (RE):
More on the Browser Kernel (BK):
How were functions split up between the RE and the BK? It sounds as though the most vulnerable tasks (i.e., those functions that have historically been responsible for the largest number of security vulnerabilities) were assigned to the RE. So if some task or function has historically been error-prone, make the RE perform that task/function. Why? Cause the RE is sandboxed whereas the BK is not. 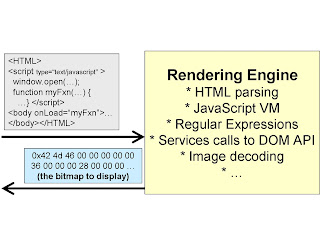 Above is a picture of how the rendering engine is effectively treated as a black box; its input is some HTML page and its output is a bitmap which should be displayed on the user's screen. Presumably, the RE gets that HTML page via a call to the BK and provides the bitmap via another BK API method. In any case, the exact mechanics are less important than the idea that the BK actually reads to / writes from the network, provides any HTML pages to the rendering engine, then interacts with the OS to actually display the rendered bitmap. So all of the privileged stuff (network interaction, receiving user input, writing to the screen) is done by the BK, not the RE. This separation

One exception is noted: the BK parses HTTP headers in order to extract the HTML or zipped content. If the content is compressed, the BK invokes a decoder (e.g., gzip, bzip2) to decompress the HTTP response then passed the decompressed enclosed HTML (or whatever) to the RE.
Plug-ins: e.g., Adobe Acrobat, Flash player, Real player, Quicktime, ...
* Each runs in a separate host process and runs outside of the sandbox
* Runs with the user's full privileges; e.g., Flash player can access the user's
microphone and webcam, can write to the file system, ...
The sandbox
The goal of the sandbox is to prevent any rendering engine process from interacting directly with the file system (and presumably the network too, but perhaps some other code is responsible for restricting network access), including the registry (we want all such accesses to be via the Browser Kernel, which exports an interface for doing these things). Even generally, want to funnel all interactions with the OS through the BK interface. The enforcement of the sandbox boundaries actually consists of several techniques:
The Browser Kernel Interface
If the sandbox above works properly then in order to access OS functionality (e.g., user interaction, persistent storage, and the network), the RE must go through the BK API.
References
* The Chrome comic book
* Chromium Developer Documentation (including design documents)
* David LeBlanc, Practical Windows Sandboxing, Part I
* David LeBlanc, Practical Windows Sandboxing, Part II
To do (to make this better/more thorough):
* Add notes about section 5, the BK interface
* Read Chromium Developer Documentation
* Talk about Google Gears and maybe more about the Plug-in architecture too